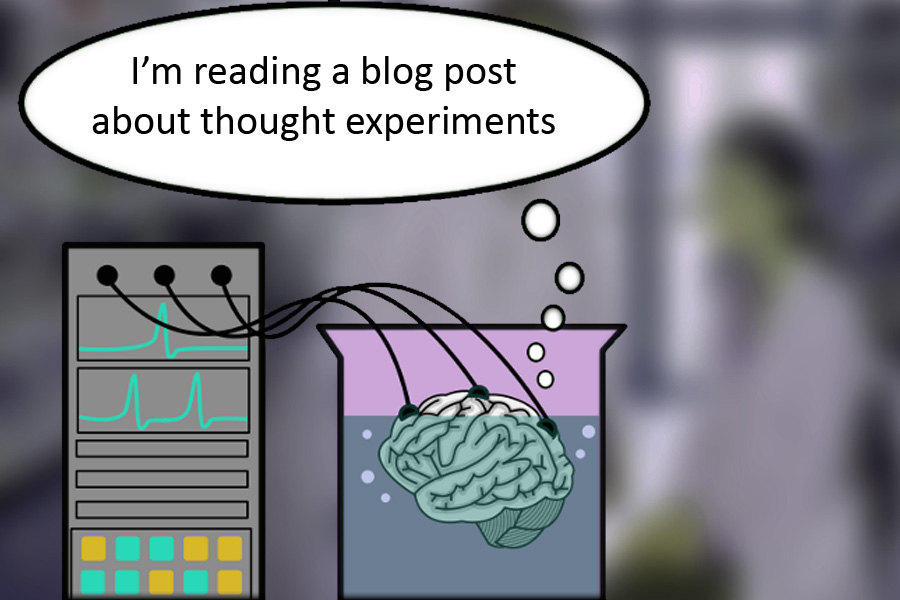 “Suppose there was a machine you could connect your brain to, which would simulate the perfect life – everything according to your wishes. You wouldn’t notice that it was all virtual. Surely you would connect yourself?”

“Never! That wouldn’t be real, what an awful thing! Your question make me shiver – I need to get get this off my mind… I’m going to play some World of Warcraft now.”

Interesting here is also the Reversal Test, which suggests that an intuitive rejection of the “Experience Machine” could be motivated by a status quo bias: Would you want to exit the machine, if you discovered that you have been connected to it all along up to now?

But let’s get back to the beginning: In ethics, as well as in philosophy in general, thought experiments have a firm place in the methodological tool box. Some thought experiments – such as Robert Nozick’s “Experience Machine” (the question above) or Philippa Foot’s “Trolley Problem” (see below) – are so famous that they are being discussed frequently at dinner tables outside of academic philosophy. However, often not all the participants in the ensuing discussion will be interpreting the intent of the thought experiment in the same way. The following paragraphs explain how we can use thought experiments to figure out what we value.

In contrast to hypotheses in the natural sciences, ethical theories cannot be tested empirically. Nevertheless, there are some useful approaches for evaluating ethical views. Besides formal criteria such as consistency (if someone claims A and non-A simultaneously, this person is in essence claiming nothing whatsoever), it is also appropriate to ask whether a position and the arguments given in support of it hold up to testing through thought experiments. The purpose of a thought experiment in the context of thinking about goals/values is usually to lead a specific intuition or assumption ad absurdum. For the criterion in question, a (decision-)situation is constructed in which the proponents of a particular position should not be willing to consistently apply their principles anymore. If this is the case, then the principle might not be a good one after all.

Thought experiments should, just like experiments in science, be free from confounding variables – otherwise it is unclear what it is that you are testing. The process of isolating all potentially confounding variables is the reason why the scenarios in thought experiments are often highly abstract or “far fetched”, not like any situations that we would expect to encounter in real life. How realistic the examples are is irrelevant as long as their content is interesting and as long as they are clear enough in terms of the allowed options and outcomes.

Standard Case: An out-of-control trolley is rolling down a slope towards five workers, who are trapped on the tracks. You find yourself standing next to the tracks in front of a lever, which, when you pull it, redirects the trolley to a sidetrack. On this sidetrack, there is one other trapped worker. Should you pull the lever, thereby causing one person to die instead of five?

Fat Man Case: Again, five workers are trapped on the track with the runaway trolley approaching. This time, there is no sidetrack. Instead, you find yourself on a footbridge across the tracks, where a fat man is standing at the edge, looking down. You realize that the man’s weight could stop the trolley. Because the fat man won’t jump by himself, the only way to prevent five other people from dying would be by pushing him onto the tracks in front of the trolley. Should you do that and thereby cause one person to die instead of five?

The first thing that stands out is that the hypothetical scenarios are pretty obscure. Especially the second case seems absurd because we’d expect runaway trolleys to be harder to stop. In order to make the thought experiment more realistic, one could of course make a number of adjustments. This can be done, but it would actually be missing the point: As long as we are very clear about what is specified to happen and what not, any thought experiment, even a highly unrealistic one, will do the trick. The guidelines for fruitful interaction with a thought experiment are the following:

1) Only the courses of action introduced in the thought experiment are possible/allowed. It is prohibited to propose further courses of action that would turn the example into a different one, because that likely wouldn’t be relevant for the principles being tested anymore.

These strict guidelines are necessary for the proper isolation of the relevant variables. In the trolley example above, the issue being focused on is whether only the outcomes of an action are relevant (here: minimizing the number of deaths), or whether it makes a significant difference how the outcomes are being brought about.

For instance, some people might believe that using someone as a means to save others is always prohibited. In the Standard Case of the trolley problem, most people are willing to redirect the trolley so that only one person dies. In the Fat Man Case, however, the situation is reversed: Most people would not push the fat man from the footbridge. It thus seems that people believe that good outcomes are not everything that counts. What else is relevant? In the light of the two instances of the thought experiment, we can now try to come up with hypotheses that pin down and explain the exact nature of this difference, and then, we could try to design further thought experiments to confirm whether the suspected explanation, why it would be bad to push the fat man from the footbridge but not bad to cause the death of a worker on the sidetrack, also makes sense to us in other cases.

Someone strictly opposed to pushing the fat man off the bridge might claim that it is categorically wrong to instrumentalize people, to use them “merely as a means” for some other end (even if that end is well-intended). In order to test whether this principle is reasonable, we can design a further thought experiment:

The Loop Case: The situation is the same as in the Standard Case, except that the sidetrack leading to the single worker makes a loop, coming back again to the main track. The sidetrack joins the main track again slightly before the spot where the five workers are trapped. In addition, the worker on the sidetrack weighs a lot, so that his body would stop the trolley. Should you pull the lever, thereby causing one person to die instead of five?

One would think that this third scenario is identical to the Standard Case in all relevant respects. When people who have never encountered trolley problems are confronted with either the Standard Case or the Loop Case, the distribution of answers will likely be quite similar. Interestingly however, the Loop Case violates the principle that one should never treat humans as a mere means, which we used as a potential reason for treating the Fat Man Case differently from the Standard Case. If the fat man weren’t trapped on the sidetrack in the Loop Case, the trolley would kill the five workers regardless of whether we pull the lever or not. If we pull the lever, the trolley will enter the sidetrack for a brief distance, but without an obstacle to stop it, it would soon rejoin the main track. The Loop Case only differs from the Standard Case due to an extra piece of track, the one that links the sidetrack back to the main one. Is it really the case that a mere piece of track (which, incidentally, will never even get used) makes such a huge difference, causing five workers to die instead of one? Given that this conclusion seems absurd, this would prompt us to call into question the “categorical prohibition against instrumentalization”.

This discussion is far from comprehensive. In order to come to a clear answer, one would of course have to go through more thought experiments and considerations (see this paper).

Good thought experiments can be surprisingly fruitful. Fortunately, when two people have differing opinions on some ethical issue, it doesn’t necessarily mean that the discussion is over. The principles/values/goals that we hold dear are not always those that we would want to follow after having thought about the topic more thoroughly. In order to figure out when this is the case, we can use cleverly constructed thought experiments to push the edges of our moral beliefs.

Understanding the reasons behind using thought experiments, we should now understand that thought experiments can be relevant even if a situation is absurd and extremely unlikely to happen in reality. If a principle P gives us results that are obviously preposterous, whether the situation in question is real or hypothetical, it shows that the reasons for adhering to P are bad. And this in turn implies that in all the cases (real or imaginary) where P gives acceptable results, it is doing so for the wrong reasons. Consequently, P may be full of surprises when it comes to applying it to new (real or imaginary) cases – which can be very dangerous. What happens when we refuse to take hypothetical reasoning seriously is best illustrated with the following example:

In the excellent TED talk Why our IQ levels are higher than our grandparents’, James Flynn recounts a discussion on racism he had with his father, where he asked the old man: “How would you feel if tomorrow morning you woke up black?” To this, Flynn’s grandfather replied: “That is the stupidest thing you ever said. Who have you ever known who woke up in the morning that turned black?”