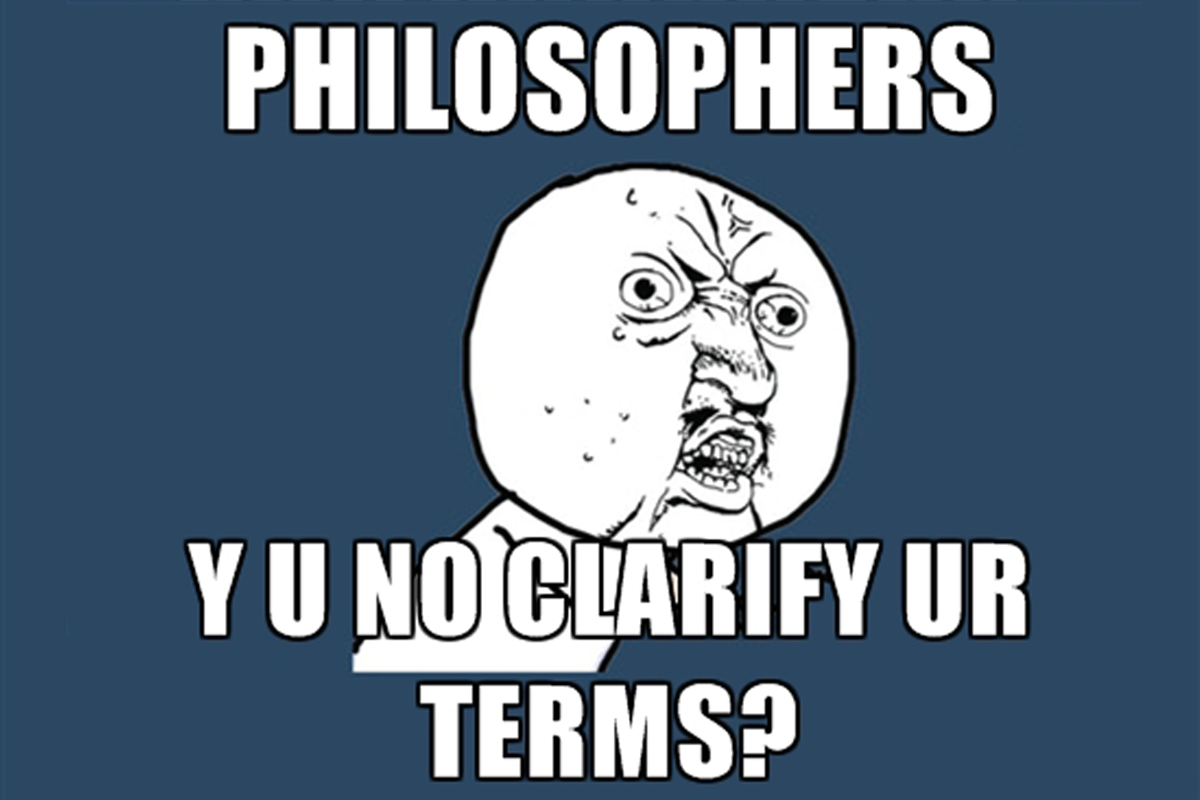 Philosophy
How words confuse us

Here is an ancient philosophical puzzle (in slightly modernized form): Cartman is captain of a pirate ship. To motivate his crew he swore that even if the ship sinks he will remain loyal and stay on the ship, and, if it comes down to it, drown with it. His crew, Ike, Clyde, and Butters, are responsible for the maintenance of the ship. Week after week they check the ship for rotten planks and occasionally replace a plank. Eventually they have replaced all the planks. Butters, not the brightest of the bunch, decides to reassemble the decommissioned planks and build his own pirate ship. Once finished, he gets on his own ship and sails out of the port. It takes only a few hours and the ship, built solely from rotten planks, sinks. Cartman finds himself in a difficult situation: must he throw himself into the sea and drown with the ship Butters reassembled from the rotten planks in order to honour his vow, or can he stay safely on his own pirate ship? Is the original pirate ship identical with the one reassembled from the rotten planks, or is it identical with the one safely anchoring in the port? Cartman, interested in his own survival, argues that it is identical with the ship in the port; Ike, sensing an opportunity to become captain himself, argues that it is identical with the sunken ship. Who’s right?

This question has given rise to many metaphysical debates among certain philosophers. But other philosophers and many non-philosophers have little patience for such questions. They smack of verbal sophistry: we feel we know all the facts, it’s just a matter of deciding what exactly we mean by “identity” and how we want to describe these facts. Many other philosophical questions feel similarly shallow, albeit perhaps to varying degrees: what is free will? What is meaning? What is an action? What is a law? What is art? In general, many “what is X” questions generate the feeling that they are shallow or purely verbal.

Such presumably verbal questions and disputes might be more frequent in philosophy, but they can be found in other disciplines as well. Here’s a prominent example from biology. The species concept is one of the central concepts of biology, comparable in importance to genes, cells, and organisms, some of the central units at lower levels of biological organization. Yet there is a lively debate about the right way to spell out the species concept: Richard L. Mayden for example noted that at least 22 distinct species concepts are being used in contemporary biology. On the face of it, different solutions just correspond to different stipulations concerning the meaning of the concept, and choosing one of them is a matter of theoretical convenience, not discovery. Yet some participants in the species debate think that the problem can be resolved through clever metaphysical reasoning. If all these questions are indeed in some sense merely verbal, then it seems that verbal disputes can sometimes go completely unnoticed by the participants in a debate, and this can lead to (potentially millennia-long) unnecessary debates, disagreements, and research. An especially poignant formulation of this view has been offered by David Hume:

“It might reasonably be expected in questions which have been canvassed and disputed with great eagerness, since the first origin of science and philosophy, that the meaning of all the terms, at least, should have been agreed upon among the disputants; and our enquiries, in the course of two thousand years, been able to pass from words to the true and real subject of the controversy. For how easy may it seem to give exact definitions of the terms employed in reasoning, and make these definitions, not the mere sound of words, the object of future scrutiny and examination? But if we consider the matter more narrowly, we shall be apt to draw a quite opposite conclusion. From this circumstance alone, that a controversy has been long kept on foot, and remains still undecided, we may presume that there is some ambiguity in the expression, and that the disputants affix different ideas to the terms employed in the controversy.”

If Hume is right and what keeps many philosophical disputes alive is a lack of agreement on the meaning and use of word, it would be great to have some kind of tool to detect such verbal disputes so we can avoid them and focus on the real questions.

This captures nicely what many of us feel when confronted with the disputes in the last section. And it gives us at least a very rough guideline for finding verbal disputes, namely that it feels like the two parties are not really disagreeing. Unfortunately, judgements on whether two parties really disagree do not always converge, as the species problem and the debate about the ship of Theseus show. Can we do better than just our intuitive feeling about a dispute?

Chalmers suggests the method of elimination, a three step method for detecting verbal disputes. Suppose you disagree with a person on the truth of a sentence S, potentially due to a disagreement over the meaning of a term T.

Step 1: Ban the term T temporarily from your vocabulary.
Step 2: Try to find a new sentence S’ in the restricted vocabulary such that the parties nonverbally disagree over S’ and this disagreement is part of the dispute over S.
Step 3: If there is such a sentence S’, then the dispute is not completely verbal, or at least there is a non-verbal dispute in the vicinity.

The same method goes by other names as well, for example “rationalist taboo” in the Less Wrong community. Applying the method to the cases above seems to give us the intuitively right results. Suppose two people disagree over whether the following screenshot is art:

The two parties put forward various arguments to support their position. A stresses that it took absolutely no skill to write these lines and then take a screenshot of the post. B points out that the screenshot has been sold for $90,900 at an online auction. A argues that plenty of non-art is being sold for much money and that that art is necessarily unique whereas a screenshot is not, it can be copied just like that. And so on.

Now let’s ban “art” from the discussion. Can we find any other sentence over which A and B disagree? It doesn’t look like it – both know perfectly well that it’s just a screenshot, that it sold for an impressive price, and how much skill it takes to type these words with a keyboard, or come up with the words. Hence they are engaged in a merely verbal dispute.

If that is right, then much of the debate on the ontology and metaphysics of art is completely misguided and rests on confusing semantic questions with factive questions. Many other debates might be in the same boat and should be abandoned instead of solved. But sometimes there are substantive disputes in the vicinity. “What is free will” for example might be a purely verbal question, but for each conception of free will it could turn out to be a substantive question whether it is necessary for legal or perhaps moral responsibility.

Occasionally even verbal disputes can have important consequences and need to be resolved instead of just diagnosed. There is at least one case where we can put a price tag on a verbal dispute: $3.5 billion. That’s the amount of money at stake in the legal battle between Swiss Re and the leaseholders of the World Trade Centre after the double-attack on the twin towers in 2001 over the right definition of “occurrence”. A New York appeals court ruled in favour of Swiss Re and decided that the attack on the two towers constituted a single occurrence, thereby reducing the insurance company’s liability significantly.

There are still some remaining questions which we discuss in Verbal Disputes II: is the method of elimination perfectly reliable, or are there sometimes false positives and negatives? And are there cases where undetected verbal disputes do more harm than just provoke unnecessary discussions and waste academic resources? (Spoiler: yes.)

Unger, P. (2014). Philosophy is a Bunch of Empty Ideas: Interview with Peter Unger.