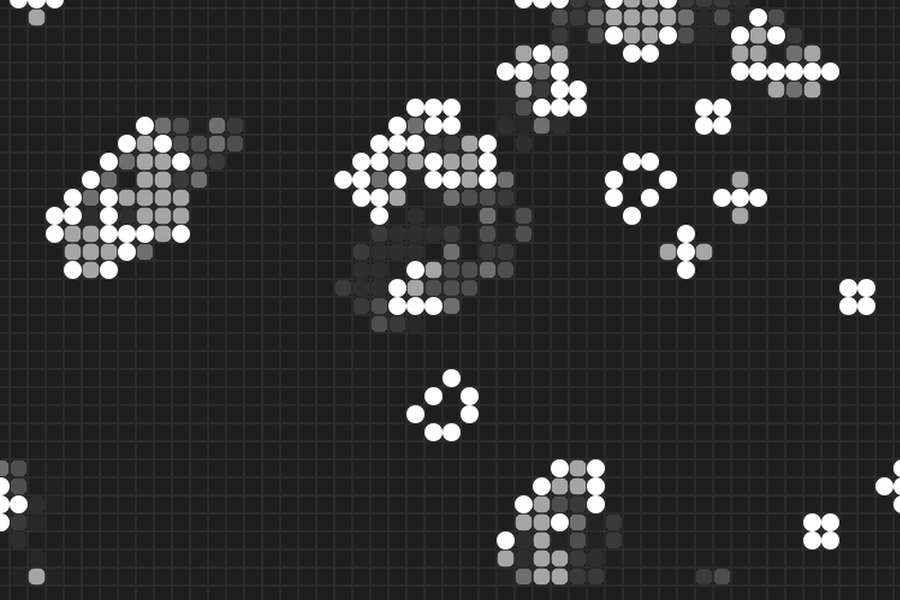 In 1927, the physicist Arthur Stanley Eddington gave the Gifford Lectures at the University of Edinburgh. In his introduction he talked about his two tables. First, the table of his everyday experience, the kind of table we’re all acquainted with through ordinary sensory experience. It has extension, color, a certain texture, solidity, and is comparatively permanent and substantial. But there is also the scientific table, the one we’ve discovered only recently. This table is mostly empty space. Sparsely scattered in that space are clusters of elementary particles, buzzing around like a swarm of bees.

“An intellect which at a certain moment would know all forces that set nature in motion, and all positions of all items of which nature is composed, if this intellect were also vast enough to submit these data to analysis, it would embrace in a single formula the movements of the greatest bodies of the universe and those of the tiniest atom; for such an intellect nothing would be uncertain and the future just like the past would be present before its eyes.”

Laplace suggests that, given sufficient knowledge of the present state of all physical entities, their properties, and relations, an intellect without any cognitive limitations would be able to deduce all the truths about the past and future of the universe from his background knowledge alone. Such an intellect would have to be vastly superior to ours in order to do the necessary calculations and analyse all of its knowledge, and perhaps for this reason it has later become known as Laplace’s demon.

It is plausible that ordinary humans couldn’t read off all the facts about the first table from facts about the second table: the amount of data to analyse is just too big. But it is also plausible that Laplace’s demon, not subjected to the cognitive limitations of us petty humans, would be able to do exactly that: simply by calculating how clusters of elementary particles interact with other particles and thereby effectively running a simulation of reality in his mind, he could see, from the simulated perspective of macroscopic beings such as humans, that the elementary particles corresponds to Eddington’s first table. [1]

But how can it be that the demon can know about the existence of things like tables just by knowing plenty of facts about microphysics? How can knowledge about one kind of stuff, namely a bunch of elementary particles, generate knowledge about another kind of stuff, namely ordinary tables? The reason for this is that the first table is, in a sense, “nothing over and above” the second table, it can be reduced to it. Tables just are clouds of elementary particles. If tables just are clouds of elementary particles acting in particular ways, then it’s not surprising that we can recover the truth of a statement formulated in table-vocabulary from statements formulated in microphysics-vocabulary, for both contain reference to the same part of reality – just under different forms of representations. [2] (Some philosophers have complained that such just-is talk is ungrammatical and mysterious. Such worries are unwarranted, there are perfectly intelligible ways in which such terminology can be made precise. Other philosophers worry that this solution runs into problems related to contingent identity since the table may be identical with some elementary particles at one time and with other elementary particles at a later time. But certain semantic theories offer solutions to these problems, see Erhardt 2014, p. 63 ff.)

Much of the history of science can be seen as steady progress in showing how big things such as cows, cars, and comets can be reduced to small things such as molecules and quarks. A good illustration of this is the case of vitalism. Vitalism is the view that the bodily behavior of organisms cannot be explained by the mechanical and biological function of organs alone, that we must also posit an irreducible and invisible “life-force” to explain the empirical data.

Vitalism seemed like a viable option in the 17th century because of pessimism that the then known mechanical functions alone could account for complicated behavior of organisms and phenomena such as replication and regeneration of lost parts. Given the biological knowledge of those days, it may have seemed plausible that mechanical organs by themselves, as a matter of empirical fact, could not collectively perform the complicated functions of an organism, and that some additional thing was needed to do the remaining functional work.

It turned out they were wrong: progress in biology and chemistry revealed more and more how these complicated functions are performed by biological organs in a mechanical fashion. We now know, for example, the mechanisms behind the regeneration of lost parts.

The Standard for Successful Reduction

Philosophers have suggested and discussed a variety of criteria, which are best understood as corresponding to different concepts of reduction to avoid pointless verbal disputes. But the most useful criterion is the one illustrated in Laplace’s demon’s knowledge of Eddington’s first table: a priori derivability. The demon can come to know all the table-facts from all the microphysics-facts simply by running a kind of simulation of the microphysical facts in his mind and then taking the point of view of macroscopical beings in that simulation and applying their concepts, in our case the concept “table”, to the simulated world. Simply by knowing microphysical facts and analyzing those facts the right way, he can know about table-facts, so in this sense he can deduce them a priori from microphysical facts.

(The criterion of asymmetric a priori derivability blocks the traditional philosophical objections against reductionism.)

The Scope and Structure of Reductionism

This conception has wide-ranging consequences: pretty much everything can be reduced to microphysics. All the special sciences such as biology or economics deal with phenomena which are reducible to what physicists study. Laplace’s demon, if provided with a complete description of all the microphysical facts of the universe and knowledge of all the relevant concepts would not just know about Eddington’s first table, he would know about cows, cars, and comets as well. The synthetic theory of evolution might be an important theory for us humans who couldn’t possibly compute all the microphysical facts, but for Laplace’s demon it would be epistemically superfluous – it would be deducible from his microphysical knowledge alone.

Are there any cases where reduction to microphysics fails? Cases which have been discussed in the literature are moral truths, modal truths (truths about what is impossible, contingent, and necessary), truths about consciousness, and some others. It seems plausible that the only case where reduction possibly fails is in the case of consciousness: arguably not even Laplace’s demon would know about consciousness if provided solely with all the microphysical facts. He would know all the behavioural and functional facts concerning humans, but that wouldn’t help him distinguish philosophical zombies from conscious beings. We might have to postulate consciousness as fundamental along with charge and spin to arrive at a complete theory. If that is the case the ultimate theory will not just relate different fundamental physical properties to each other, it will also relate basic elements of consciousness to physical properties. For many people this would be a repugnant conclusion (wouldn’t it be neat to have just physics as the fundamental theory?), and it is fair to say that the reducibility of consciousness is one of the big remaining questions for the project of global reductionism.

2. The claim here is only that it is less surprising that we can recover the truth of a statement formulated in table-vocabulary from statements formulated in microphysics-vocabulary if the two are co-referential. It would still be good to have a detailed account of the mechanism behind this process to make sure that this is indeed possible. For such an account see Erhardt 2014, p72 ff.↩

3. Gregg Rosenberg has an exellent discussion of cellular automata such as Conway’s Game of Life in chapter two of his book A Place For Consciousness (Rosenberg 2004), where he also relates them to reductionism about consciousness, the topic of the last section of this post.↩

4. If mathematical truths are a priori and knowable without empirical investigation, and “if A then B” is always true if B is true, then we can plug any mathematical truth into B and thus “derive” it from A, whatever A may be. The same holds for logical tautologies, we can “derive” them from any other truth. Other cases we would presumably not want to classify as cases of reduction are those where the consequent follows from the antecedent in virtue of logic alone, e.g. “if water boils, then either water boils or grass is blue”. One way to avoid that these cases count as reductions is to restrict the antecedent and the consequent to atomic sentences.↩

Kim, J. (1992). Multiple realization and the metaphysics of reduction. Philosophy and Phenomenological Research, 1-26.