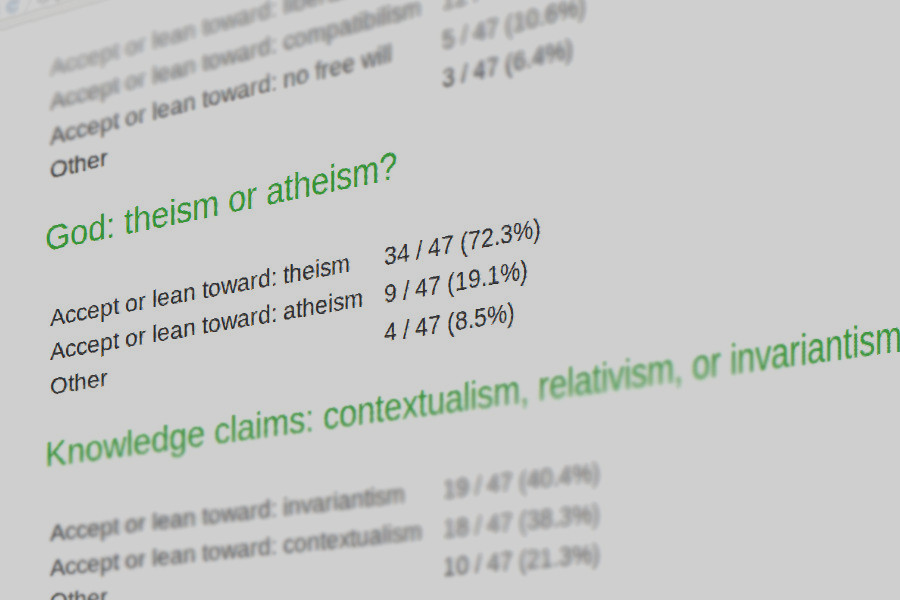 Rationality
70% theists among philosophers of religion: me worry?

Post last updated: 12.02.2015. Thanks to Kevin Corbett, Michael Tilley, M, and other commentators who helped us improve this post!

Suppose you are a layman when it comes to computers and artificial intelligence and you are curious about the time of arrival of human-level artificial intelligence, computers which are at least as smart as humans are. How can you arrive at realistic estimates? A sensible option is to turn to experts in the field, since their opinion is informed by their expert knowledge.

Now suppose you want to figure out whether God(s) exist, but you’re not an expert on the question. How can you make up your mind without reading thousands of pages on arguments for and against theism? You might want to turn to experts, in this case philosophers, or more specifically, philosophers of religion. What would these experts tell us?

A survey conducted among philosophers in 2009 shed some light on this question. Of all the faculty members among the 3226 philosophers who took the survey, 72.8% were atheists and only 14.6% theists. (The remaining 12.6% chose another option.) This is especially interesting when contrasted with the percentage of atheists among the global population: a paltry 2.01% in 2010.

But if we focus more narrowly on philosophers of religion, the experts among philosophers on the question of theism/atheism, we’re in for a surprise. Among philosophers specialized on philosophy of religion only 19.1% accept or lean toward atheism, while 72.3% accept or lean toward theism. This is the highest effect any kind of specialization has on any of the questions in the survey. In a similar study by Helen de Cruz only 15.7% of the philosophers of religion accepted atheism and 5% were agnostics while 57.7% self-identified as Christian theists. 17.6% did not classify themselves as falling in any of those categories.

What should we make of this? Does this mean that theists can justify their beliefs by appealing to the authority of philosophy of religion experts? Should atheists be worried since they contradict the majority view among experts on the topic?

On the face of it, there are two hypotheses which could explain the data, one of them worrying for atheists, the other less so:

It should be noted that these two cases are not mutually exclusive. Adherents of the expert knowledge hypothesis could in principle admit that there is a selection bias and claim that expert knowledge still favors theism over atheism. This would then have to be reflected not in the overall theists to atheists ratio among philosophers of religion, but in how exposure to philosophy of religion changes the theists to atheists ratio. So we have to keep in mind in the next section that diagnosing a selection bias is not sufficient to undermine the expert knowledge hypothesis.

To draw further conclusions concerning the two hypotheses we need more empirical data, as the 2009 philsurvey does not contain sufficient information to determine their truth or falsity. Helen De Cruz’s study, however, contains qualitative data on why philosophers started doing philosophy of religion as well as quantitative data on how their beliefs concerning theism and atheism developed over time. This is exactly what we need.

Motivation for doing philosophy of religion: The study brings to light three main reasons for doing philosophy of religion. The most prevalent is described by the author of the study as “faith seeking understanding”, religious people who want to better understand their own belief. The second frequently cited reasons was Proselytism and witnessing: many philosophers of religion felt that doing philosophy of religion was part of their calling as religious people. One philosopher for example wrote: “My religious commitment helps to motivate some of the work I do (part of which involves defending and explicating Christian doctrine)”. The third most cited reason was a fascination with religion as a cultural phenomenon. These results give some support to the selection bias hypothesis, but since the study does not contain the numbers for each of these responses it is too early to tell.

belief revision to atheism or agnosticism: 11.8%

change, but not attributed to philosophy: 8.1%

Moreover, there are more philosophers of religion updating their beliefs toward atheism and agnosticism than toward theism. This seems to weaken the hypothesis that although there is a strong selection bias, expert knowledge favouring theism is still reflected in the fact that philosophers of religion convert more often to theism than to atheism/agnosticism while acquiring expertise in the field. The numbers show that the ratio of theists to atheists/agnostics declines with exposure to philosophy of religion.

This verdict is confirmed if we look at the percentage of theists who report that exposure to philosophy of religion tempered their beliefs and the percentage of atheist who reported a tempering of their beliefs. Of the theists, 33.7% reported a tempering influence, whereas only 10.3% of the atheists reported a similar influence. In other words: a higher proportion of theists become less sure about beliefs such as taking the Bible to be literally true, accepting the Fall, regarding Catholics as heretics, etc. than atheists who become less sure about aspects of their atheism or more appreciative of theist views.

Despite these statistical conclusions it is still possible that most theists remain theists due to strong arguments for theism, and those atheists/agnostics who convert to theism do so for the same reason, while conversion to atheism/agnosticism happens due to weak arguments. This may be very implausible, but it is an epistemic possibility.

General Remarks on Philosophy of Religion

The findings of this post fit with other findings on reasoning and religion: It has been argued that many philosophers of religion suffer from cognitive biases and group influence, and that the field as a whole is too partisan, too polemical, too narrow in its focus, and too often evaluated using criteria that are theological or religious instead of philosophical. Recent work in cognitive science of religion suggests that analytic thinking is a pathway to atheism (Norenzayan and Gervais 2013), and it has been observed that analytic thinkers show weaker religious belief and tend to lose their religious fervour, even if they were originally raised in a religious environment (Shenhav et al. 2012). Experimental work supports these correlations and provides additional evidence for causal connections between analytic thinking and erosion of religious beliefs (Gervais and Norenzayan 2012).

An especially critical stance on philosophy of religion has been taken by one of the participants in De Cruz’s study: “I would not be the first to say that philosophy of religion, especially “analytic theology”, is simply not philosophy. It’s Christian apologetics, and it often is poorer philosophically because of that. A Christian bias pervades everything, and, once one becomes a non-Christian, the irrational faith-based assumptions and intuitions start to stand out.” More work would need to be done to determine whether things really are that bad in philosophy of religion, but the empirical data are already sufficient to render the expert knowledge hypothesis improbable and hence undermine the appeal to authority arguments in the theism/atheism debate.

This article has 22 comments