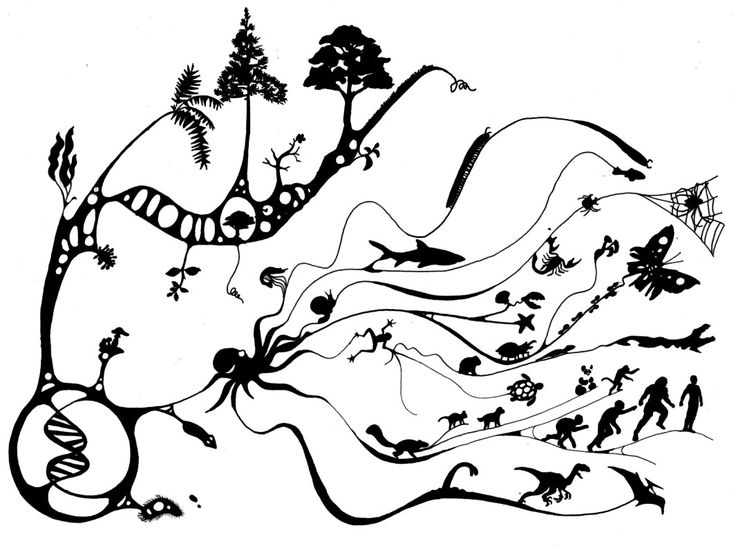 Evolution
Or: Metaphorically, it’s all about gene-copying success

How evolutionary biology is being misunderstood

The notion that evolution has a goal/purpose is a widespread misconception that comes in several variations. Many people falsely believe that evolution was working towards humans as a final product. But from a biological perspective, there is really no reason to single out the human species specifically. Evolution produced a “tree of life”, with humans being an ordinary twig among many others. It did not produce a “ladder of life” where humans would throne at the top. Homo sapiens is one species out of many, and all currently existing organisms have an evolutionary history of the same length, leading back to the same origin most likely.

Even if one doesn’t view humans as some kind of “end product”, one might still believe that evolution is operating according to some higher purpose, or that it necessarily strives into a particular direction. More complexity, harmony, progress or  some kind of plan that needs to be adhered to. But all of that, too, is mistaken. At most, evolution has certain tendencies – but no goal or purpose.

Why evolutionary biology is being misunderstood

Evolutionary biology is difficult to grasp because it strongly violates some of our basic intuitions about how things work. We have the tendency to favor teleological (“goal-directed”) explanations over causal explanations (Kelemen & Rosset, 2009) even though with regard to nature, teleological explanations are wrong. For instance, when children are asked whether rain happens “for plants to grow” or “because water condenses in the clouds,” they prefer the first explanation. This likely explains, in combination with religious motivations and perhaps also vanity or wishful thinking, why people have such difficulty to properly understand the evolutionary mechanism.

The mechanism behind evolution

Evolution’s mechanism is surprisingly simple. Those variations (alleles) of a gene which give an individual a comparative advantage in terms of biological fitness – in being beneficial for successful reproduction – will automatically become more prevalent in the genepool. Whether a given mutation leads to a fitness advantage depends on the environment of the organism in question. Out of the random variation, which is the result of mutations/copying-errors (which can be the result of exposure to radiation, metals or chemical substances), only a small percentage actually increases the fitness of an individual. Those mutations tend to prevail and become widespread, whereas mutations that lead to a disadvantage will likely be weeded out of the genepool. Even though the variation is originally random, a non-random subset of it – the fitness-benefitting components – ends up conserved through natural selection. This mechanism results in organisms adapting to better survive and reproduce in their environment.

It’s important to realize that this process is always happening in small steps. For large changes in the phenotype of an organism, many mutations are required. Most of the mutations which happened throughout the evolutionary past had to give their first bearer a fitness advantage – otherwise they would likely not have become the prevalent allele in the genepool. It could be that a first mutation is good insofar as it would pave the way for a subsequent mutation, which then, together with the first one, proves to be extremely beneficial. However, if the first mutation does not provide a fitness advantage on its own, or worse, if it proves to be harmful in standalone, without the subsequent fitness-enhancing mutation, then it is very unlikely that it will stay around long enough for the fitness-enhancing mutation to come along too, by chance. This is the case despite the great benefits the two mutations could provide in combination. There is simply no way for natural selection to anticipate such future benefits.

Natural selection has no foresight. In each round, the individuals that die early or are comparatively bad at reproducing are weeded out. There have likely been many situations in a lineage’s evolutionary history where small, slightly fitness-reducing steps would have provided a benefit in the long run, perhaps leading to a lineage culminating in the dominant species across many continents. However, evolution never “goes down” in fitness, because organisms with a lower fitness (by definition) will be more likely to lose the race for reproduction, being outcompeted by their conspecifics.

Conversely, there is also no mechanism that prevents short-sighted improvements that will turn out to carry a design disadvantage in the long run. Once a lineage, following the selection pressure of the current environment, went through a given adaptation, there is no convenient way for evolution to go back to the sketchpad to pursue a different branch. The sole exception would be if the environment changes in a way that exactly reverses the selection pressures and the past mutations – but that, too, is of course very unlikely.

The evolutionary biologist Richard Dawkins (1986) used the analogy of a “blind watchmaker” to describe natural selection: “blind” because it is a mechanical process lacking any sort of foresight, and “watchmaker” because nonetheless, it manages to produce structures (living organisms!) that look as though they were deliberately designed.

Evolution being blind implies that lineages only ever strive towards local optima in regard to the fitness landscape of all possible gene combinations. Global optima, where reaching them would require foresight or planning, are thus not to be expected as a result of evolution.

An example for being stuck in local optima is eye design. Different kinds of eye designs have evolved more than forty times independently of each other (Land & Nilsson, 2002). Not all their basic designs for visual organs had the same potential for sight improvements in the organism’s evolutionary future. Because evolution lacks foresight, all kinds of designs evolved, as long as there was a continuous pathway of beneficial mutations leading up to them.

Contrary to expectation, it is also not the case that evolution is always at work with the same pace. Evolutionary changes in a population happen when the relative frequency of alleles in the genepool is changing. In large populations where no migration happens and where the environment remains constant, it is well possible that very few such changes happen and that evolution thus remains static for long periods of time. This phenomenon contradicts the notion that evolution is continuously striving towards a specific direction.

It was explained further above that, in terms of reproductive fitness, the evolutionary trend is always upwards. This should not be confused with claims about complexity, size or abilities having to go “upwards” as well: Evolutionary history is full of examples where lineages became smaller. One example would be the common sparrow, whose ancestors were predatory dinosaurs.

Further, depending on the environmental conditions, it is even possible that abilities are lost or stunted. Cave fishes, living in completely dark caves under the surface, have eyes that, unlike their ancestors’, are permanently degenerated. As their dark environment lacks any selection pressures for sight, mutations that harmed eyesight (and thereby maybe saved energy for other organs) where not to the fishes’ disadvantage.

Evolution has no purpose; it simply happens. There is no reason to assume that evolution comes with some objective  “improvement”. The only thing that is constantly improving is the adaptedness of individuals to their given environment. Because the environment changes, this “progress” always remains relative – progress relative to the adaptedness to an environment.

In case we want to metaphorically talk about a “goal” of evolution, then the goal is simply the copying success of genes. But that, too, does not happen in a strategically planned manner, for evolution is – metaphorically speaking again – “blind and indifferent.”